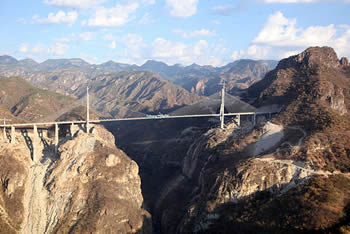 Baluarte Bridge is the highest cable stayed bridge in the world

In an effort to promote increased trade and tourism between the coastal city of Mazatlan and the capital city of Durango, Mexico has built the tallest cable-stayed bridge in North America.

Officially dedicated in January 2012, the Baluarte Bridge spans the Baluarte River in the Sierra Madre Occidental Mountains in the state of Sinaloa at a height of 1321 feet. This bridge is the crown jewel of the highway improvement project intended to decrease travel time between these 2 major cities by more than 4 hours.

The bridge is scheduled to be open for traffic in late 2012 and officials anticipate over 2,000 vehicles per day will travel over this massive concrete span. The entire project includes over 60 tunnels burrowing through the mountainous terrain and 8 bridges that are at least 300 feet high.

So if you're looking to take a new driving adventure, come take advantage of this new marvel of Mexican engineering and drive over the Baluarte Bridge.

And don't forget to purchase some Mexican auto insurance before you go!