Biking Around the Baja Countryside

Dirt roads all to ourselves 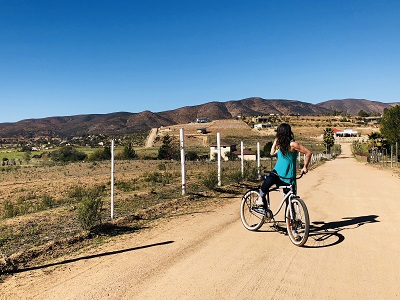 When we woke up in an Airstream at Ruta de Arte y Vino, a glamping park in Baja’s Valle de Guadalupe, a sign hanging by a string on one of the walls came into focus:

It was our first morning in Mexico after arriving to wine country just in time to see rows and rows of vines glowing in the pink light of the setting sun, and we were well on our way to checking most of those things off the list. The theme here seemed to be “relax,” and we pondered staying another night to do just that. But we were excited to explore more, and ready to get our legs moving. So we went to inquire about the bicycles that were lined up under a terracotta and wire sculpture of a smiling sun.

"Renta Bicicletas, $50.00 XDIA" was written in chalk on a piece of wood above eye level, but the man who had led us to our Airstream the night before told us to just take them. We thanked him, and picked out two bikes with tires thick enough to handle the bumpy dirt roads ahead of us. The sun was shining, and it felt good on our bare arms. Passing two young people on bikes (and a friend running alongside them), we made our way toward the hills that we could see in the distance. Houses dotted the land at their base, and vineyards on slopes unfurled in front of them like royal green carpets.

We didn't have a map of the rural backcountry, but we weren’t worried about finding our way back. As we picked up speed, the little cluster of Airstreams behind us got smaller and smaller, and as far as our eyes could see, we had the open dirt roads to ourselves.

"Whoo hoo!" we shouted, as our heavy bikes rattled over bumps and rocks. People who were out working on the land could hear us coming, and they stopped what they were doing to wave or say hello. Cows, goats and flowers lined the roads, and barking dogs came running up to us. We passed a horse grazing next to trees that looked like giant stalks of asparagus, artistic metal gates that made abstract shadows on the ground and an original landscape painting nailed to a post.

My favorite moment was when Maria rode to the top of a hill, turned around to face me, gracefully raised her right arm to signal that she was about to perform something and rode in a little circle next to a towering tree before disappearing into the sun.

On the way back, we found that it was better to push, rather than ride, the clunky bikes up some of the hills. But this allowed us to slow down and enjoy the quiet before clanking quickly down the other side. When we got closer to our Airstream, I heard Spanish music blaring from one of the small houses on the side of the road, so stopped to listen. It sounded like the man singing was belting out the most passionate love song for the Valle de Guadalupe.