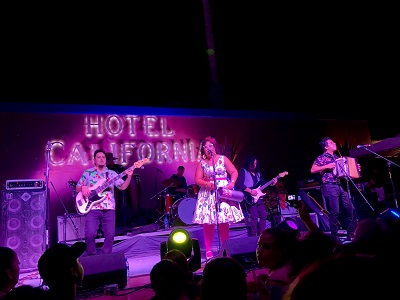 It’s a full moon, and the energy is high. We show up at Hotel California to see La Santa Cecilia, who is headlining the last night of the annual Tropic of Cancer Music Festival. To our surprise, Joan Osborne is playing on the beautiful outdoor stage as we arrive, and she will end up coming back on stage to sing a song with La Santa Cecilia.

The place is packed, with an almost 50-50 mix of tourists and locals. Aida and Natalia introduce me to their Mexican friends, who live at the heart of a vibrant artistic community in San Jose del Cabo.

Hotel California is not, it turns out, named for the famous Eagles song, and contrary to popular belief, there is no affiliation between the two. But it’s still a really cool place to see live music, with lots of room to dance under the stars. The 16-room hotel has been open since 1950, and the Chinese man who opened it was the first to bring ice from La Paz, meaning that it was the only place in town to serve cold beer for a while, making it very popular. There are also many stories about ghosts and spirits inhabiting its courtyard.

La Santa Cecilia comes on stage wearing a dress printed with cactuses and her signature cat-eye glasses, and the energy shifts to a wild frenzy. Tropical vibes. We dance to every song, Aida and Natalia singing along with several of them. I had never seen or even heard of Mexico’s La Santa Cecilia, and now I’m in love. Her voice is incredible and the entire band is on point. The two-week-long Tropic of Cancer Music Festival is reaching its highest high.

I’m separated from Aida and Natalia during the last few songs, and find them later in the street. They snuck backstage to meet Cecilia, taking the opportunity to give her a sip of their cacao-infused mezcal and invite her to visit “The Shanti Kitchen” at our camp. “Maybe Tuesday!” they say. She never does show up, though her imminent arrival is talked about for the next several days. Loose plans in Mexico are accepted as possibilities, dreamlike in quality, and their dissipation is forgiven as a natural thing as people move through life moment by moment.