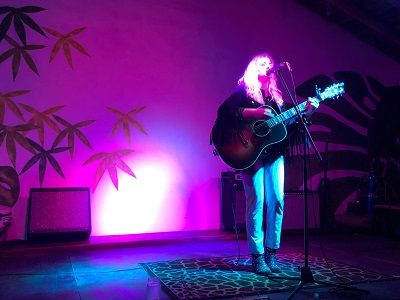 The Tropic of Cancer music festival is a continuation, after a couple of years’ absence, of a festival that was begun by REM’s Peter Buck. In 2016, Peter Buck released a diatribe on stage against local officials for being “in bed,” so to speak, with the “sleazy developers” he felt were ruining the area. The local officials were in the audience and promptly pulled the festival’s seed money. Buck’s visa status was questioned, and he left, for a while, anyway. The festival blinked out.

The two-week-long Tropic of Cancer music festival seems to fill that void for locals and travelers who loved the live music, and beginning in 2019, it looks to be an annual event once again.

It’s $200 pesos to enter tonight’s show (about $11), an all-female lineup at Todos Santos’ bar La Morena. Many of the artists turn out to be American singer-songwriters. It’s packed inside, with chairs mostly full, a bar that is three bodies deep to get to, and an outdoor area full of young people smoking and drinking and talking over the music. 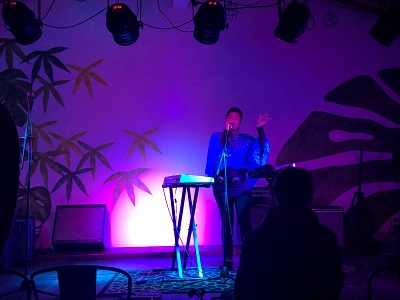 I order a shot of mezcal to sip and find a perch next to a woman my age with a patch on her jean jacket that says “No Cat Calls.” We talk, and she tells me she’s from the midwest, and traveling without money.

I stay for several performances: each woman gets four songs. Divier, the only Mexican musician in tonight’s lineup, loops her keyboard and vocals with otherworldly effect. Hannah Wicklund, hailing from South Carolina, tosses a thick long mane of curly hair and shreds her electric guitar, along with powerful vocals. I especially like a song she wrote about social media’s hold on us. This girl is going places. She’s only 21, and her talent and passion is palpable. Perhaps my favorite act is a country singer named Elaina Kay from Texas, whose charismatic stage presence and no-nonsense vocals wrangle complete attention and awe from an otherwise half-interested bar crowd. Everyone stops their small talk to hear her sing.

I stay for a few more acts then retreat to my hotel, wanting to get some sleep to explore Todos Santos the next day. A few days later, I run into Hannah Wicklund again, and have the opportunity to thank her in person for her music. I also see several other musicians in town to perform, which is a really cool and unexpected occurrence timed with my visit.