Gateway to the Giants

Fueling up in El Rosario, the only gas station for miles 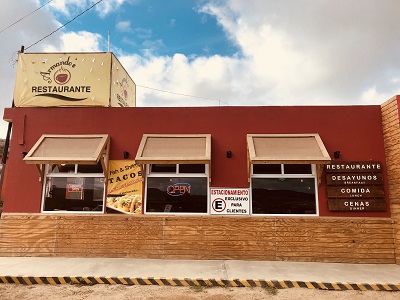 Armando’s Restaurante, advertising desayunos (breakfast), comida (lunch) and cena (dinner), is located on the side of the main road in the blink-of-an-eye-town El Rosario, the gateway to the dramatic Valle de los Cirios. It sits next to a restaurant y pizzeria, and across the street from a large dirt sports field, a small Futbol Rapido court, a Farmacia Mega and a pastel-colored Birrieria la Yaquesita with a painted animal skull adorning the front.

Bright yellow walls and tablecloths, and sunflower placemats on the tables give the family-owned Armando’s a sunny, welcoming feel, and tables have been joined to accommodate large groups. A Christmas tree is decorated with purple poinsettias and ribbons, and a soccer trophy, flanked by coffee mugs full of small cacti, is displayed on a shelf next to the kitchen window. On an illustrated wall map of Baja next to the door, El Rosario is tucked between the Bahia de San Quintín and the Bahia Rosario, and to its south, where the road sways inland, are Ruinas de las Misiones El Rosario and Ruinas de la Mision San Fernando. 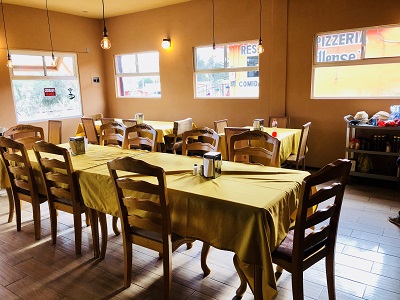 We stopped at Armando’s on our way to Guerrero Negro, and we were the only ones dining that afternoon. If we had been earlier for breakfast or later for lunch, we might have shared the quiet and comfortable space with locals, or other travelers on our route. A man with kind eyes greeted us, and a woman, followed around by a small boy, served us. They were all bundled in winter jackets. Heavy gray clouds hovered above the green hills that we could see out the windows, and we wondered if they would lift for our long drive. We ordered scrambled eggs, an omelette with cheese and bacon, and coffee. The woman asked where we were from, and we told her San Francisco and Santa Cruz. She was excited to meet people from so far away, and asked if she could take a photo of us for the restaurant’s Facebook page. 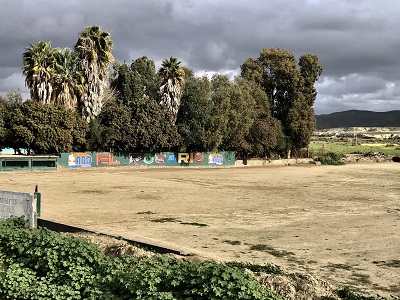 If we weren’t hoping to make it to Guerrero Negro by dark, we would have tried to find the nearby adobe ruins from the Mision Nuestra Senora del Rosario de Viñadaco (out of commission by 1832) that we had read about. The first site of the mission, founded in 1774 and moved in 1802, was in town—about a kilometer from today’s 24-hour gas station. The second site was across the river, in the village of El Rosario de Abajo. But if we had time for anything other than driving through the Valle de los Cirios, we decided that it would be stopping at Las Pintas, where 2,000-year-old petroglyphs cover the rocks. After 22 kilometers south on Mexico 1, we’d see a turnoff for Punta San Carlos, and a dirt road would lead us there. We finished our coffee, said goodbye to our new friends and hit the road.

Lunch at Armando’s (including two breakfast plates and four cups of coffee): $9.67