After dropping my friend Molly off at the airport in Cabos San Lucas, I take the 19 north out of town toward El Pescadero, a small, still unpaved beach community just south of Todos Santos. It is the end of a two-week Baja adventure with a dear friend, and the beginning of my solo adventures.

Just before the highway opens up to an hour of scenic road, a toll booth (the first and only one I’ve encountered in Baja) appears. I pay 86 pesos ($4.50) to be free as the wind.

The landscape on this drive will swallow a lone driver up. There is so much to look at, to ponder. Open the windows and let your hair fly.

Glittering blue ocean pounds the southern tip of the Baja Peninsula out my driver’s side window, far below. Out the passenger window, hills in shades of green resolve into cactuses at closer range, backed the whole time by the Sierra de la Laguna mountains—the highest peaks of Baja’s mountainous backbone. The mountains are said to have been part of the Sierra Nevada range in Northern California in the Jurassic era.

You’ll know you are entering El Pescadero when you fly past a dirt road leading to Playa Cerritos, Cerritos Beach. It is one of the happiest U-Turns of my life. 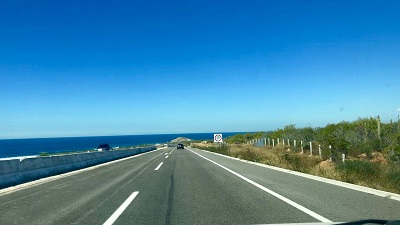 On the dirt road to Cerritos Beach, two women thumb a ride in the hot sun, and I welcome them into the shade of my car. “Cómo está el agua?” I ask them of Playa Cerritos, which is close enough now to fill the air with its salt. “Muy rico,” says the elderly woman in the front seat. Followed by a drawn-out-for-emphasis “Muuuuuuuuuuuuuy rico” from the back seat. “Gracias, mija” (thank you, daughter) the older woman says when I drop them off at their car.

Playa Cerritos is the only swimmable beach on Baja’s West Cape, and it turns out to true, the water is an elixir of contentment: clear green, not too warm, not too cold, and gentle long waves frothing with laughter.

Refreshed, I decide to get myself lost on the palm and bouganvilla-lined unpaved roads of the beach-side of the highway. I head vaguely in the direction of the “unswimmable” coast.

Skirting arid, sundrenched farmland, I pass hand-painted signs advertising lots for sale by the hectare. It reminds me of Pichlemu, a surf colony of dirt roads in Chile that I visited in 2009, whose citizens were able to protect the land and surf break from corporate developers. A billboard on the freeway just before El Pescadero, advertising “Barefoot Luxury Condos—models ready to tour!” indicates that El Pescadero may not stay this quaint for much longer.

The sand road ends at the ocean, as I’d hoped. Here, the waves pound the beach with such ferocity that the sand drops off steeply. Definitely not a place to swim, but the waves take the heat of the day off my skin, and I enjoy the entire beach to myself.

Walking back to my car, a man sits in the shade of his RV. He tears the top sheet of paper from his notebook and tosses it into a bin by his feet. We nod to each other, and then his pen is already moving across a fresh sheet, a poem, maybe, or a letter to someone far away. 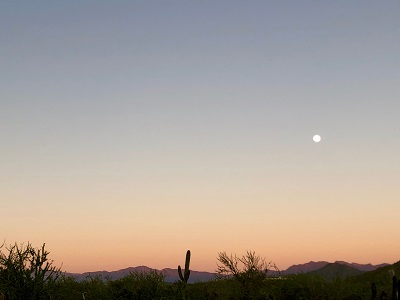 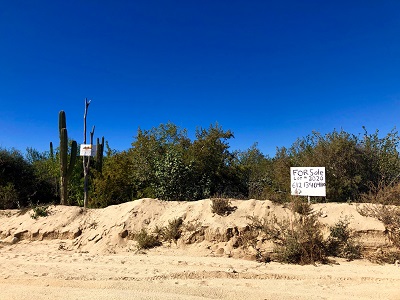