The history of one of Baja’s prettiest missions 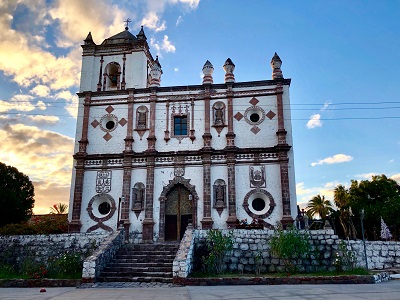 After miles of arid desert, we plunge into a lush oasis of date palms along the Rio San Ignacio, and appreciate for the first time, what oasis really means.

Pulling through the little colonial town of San Ignacio on our way to San Ignacio Lagoon, I ask Molly to stop so I can check out the mission that looms over the town square. The sun is just setting, backlighting its bougainvillea-framed facade, and birds circle above the palms and fertile fields beyond.

Surely there is much sadness in what really went down when the Spanish began to infiltrate and exploit the cultures who were here before them, and missions were instrumental in the takeover. But I realize after reading every single placard on the property, that missions also served as a place for the people in many beautiful ways, and continue to be sacred epicenters in local communities. There is also much physical beauty in these old structures.

This is probably one of the prettiest missions I’ve seen, and the most impressive one I’ve seen in Baja so far. I climb one of its outer staircases and peer into the courtyards and surrounding hills of the oasis while thinking about the people who lived and worked here over the last centuries, climbing these same well-worn steps every day. 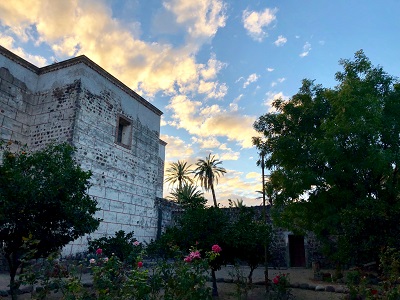 The site for this mission was originally known to local indians as “Kadakaamán,” which in the Cochimí language means “stream of reeds.” This was sacred to the indigenous, and there’s a real magic in the air, and in the thick foliage heading out to the lagoon.

According the the placards, the process of building the mission wasn’t completed until 1786. This mission was foundational to Baja’s missional expansion, since the site’s fertile soil and climate made it an optimal place to farm.

Sadly, during the first third of the XIX century, the Cochimí people disappeared completely from this territory. Reasons cited are disease and “cultural changes to the way of life.” The mission then gave way to a different society formed by mestizo (or mixed Spanish and indigenous) families.

I spend some time walking the peaceful grounds and find the kitchen and dormitories where soldiers who protected it lived. Later, Dominican Padre Felix Caballero came here in 1840, essentially to die. Caballero had apparently treated the natives so cruelly in his mission in Guadalupe that they rose up against him, and it was at Kadakaamán that he sought shelter, living his last few months in this oasis paradise. 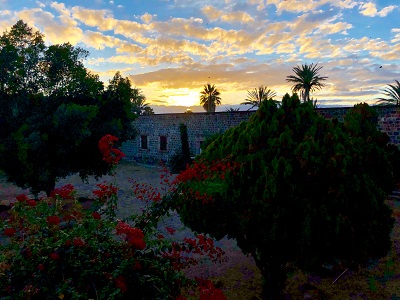 After his death, the people of the town used the mission, and in 1930 it served as the town jail. In 1950 it became a nunnery, and a “refuge” for the young women of San Ignacio, who visited the nuns daily for piano and cooking lessons. That’s kind of sweet, I think, and trace the faint original blue-gray paint on the lower portions of the walls.

I get chills when I read that when Padre Jaime began his garden here, he found several skeletons buried with their heads touching the wall of the nave—a position of great honor—and they remain buried there today, but their names or identities are unknown.

Location: Take a right on Carretera Ramal a San Ignacio, after the military checkpoint on 1 if you’re heading south. You’ll see a sign for San Ignacio. Plunge through an oasis of palms and in about a half mile you’re there. A handful of restaurants offer outdoor dining overlooking the plaza and cold beer.