Whales aren’t the only thing to discover in Guerrero Negro 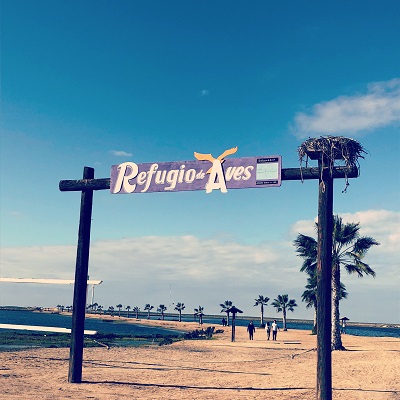 Guerrero Negro’s Laguna Ojo de Liebre is known as one of the three lagoons gray whales migrate to from Alaska in the winter months to breed and give birth, and the town boasts multiple tour operators. But since we are a bit early for the season of viewing, petting, and possibly kissing the friendly creatures, we decide to save the experience for Laguna San Ignacio, where we read that the encounters were most likely.

Hoping to experience a bit of Guerrero Negro before heading south, we follow an unmarked dirt road to see what we can find. It leads us past what first appeared to be a neighborhood, but turns out to be a cemetery, where rows of small, colorful adobe structures topped with crosses face one another.

The downtown is sleepy on New Year’s Day, with many small businesses (taco shops, beauty parlors and more) shuttered. Two men are selling freshly squeezed orange juice and large bags of oranges from a white truck on the side of the road, and, craving some vitamin C, we stop and ask if we can buy only six oranges. They say yes, and charge us $50 pesos (about $2.60) for the oranges plus a bottle of fresh-squeezed juice, calling us “gringas” as we drive away. 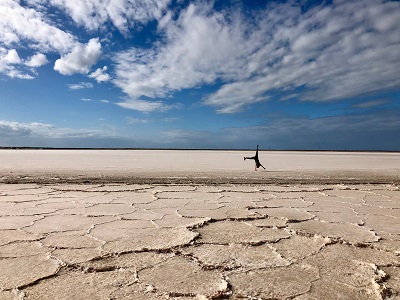 We try to find a bird sanctuary that a woman at TerraSal told us about, and instead, stumble upon the salt flats. Guerrero Negro is home to Saltworks, an open-air salt mine where 9 percent of the world’s salt comes from. The salt plant, which offers free tours, is closed for the holiday. But we are happy to explore the area where the salt evaporates and is harvested. Large white sheets of salt, cracked in patterns that resembled a turtle’s shell, are thick and sparkling. We walk on them barefoot, and it’s such a weird sensation that we are compelled to do cartwheels and act weird ourselves. (Note: if you attempt gymnastics on salt flats, you may notice after that your toe is bleeding. The salt, when dried and crusty, is very sharp.)

Energized by our saltworks shenanigans, we head back to the car with a plan to drive to Laguna San Ignacio by nightfall. But on the road out of Guerrero Negro, we pass the bird sanctuary­—Refugio de Aves—and decide to turn around and check it out. On the road in, groups of teenagers lean against parked cars, drinking out of cans and dancing to blaring music.

The free refuge, marked by a purple sign at the entrance, consists of salt marshes that attract birds including egrets, herons, cormorants, pelicans, ducks, sparrows, gulls and more. A dirt path begins where the pavement ends, and a row of palm trees runs down the middle of it, with water on both sides. Signs with pictures and information about the various bird species can be found along the path, and they come in handy for identifying whatever swims by or cruises overhead.