The Road to San Ignacio Lagoon 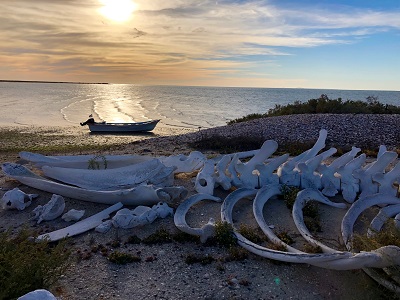 Creaks and groans and the occasional pop of rock on metal is our soundtrack as the sun sets over our final leg of the journey from the town of San Ignacio to the lagoon of San Ignacio. I am still thinking these are the Tres Virgenes volcanos silhouetted on the horizon.

The road turns to washboard and stays that way for about 20 kilometers, and even creeping along at 5 mph rattles every piece of metal on my car.

It gets dark before we reach San Ignacio lagoon, but we can smell its salty brine long before the dirt road begins to hug its shores. Seeing the water brings a charge of excitement, and I wonder if there are any whales already out there. Can they hear my silent greetings?

It is January, so any whales out there would be among the first to complete the 5,000-mile journey from Arctic seas this migration season. I read somewhere that they continue swimming while sleeping; whales on autopilot. 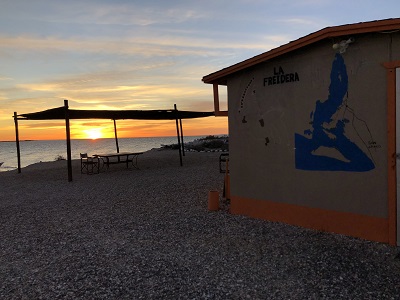 Molly drives on in her characteristic calm, as we lose cell service and our headlights begin to fall on the occasional panga (small boat) resting on the shoreline. Tiny hamlets pop up here and there along the lagoon, fed by fishing and whale-watching tourism.

San Ignacio Lagoon is five miles in width at its widest, and designated a World Heritage site in 1993. It is an important habitat for gray whale migration, as well as a feeding ground for seven species of endangered sea turtles.

Finally, we see the sign we’ve come all this way for: Antonio’s Eco Tours. Two dogs and a man with a lantern greet us. He shows us into the first of a handful of cabins on stilts, each with a private porch that faces the lagoon. It looks like we are the only guests staying here.

A single bulb on the ceiling lights the little cabin, and there is charm in the simplicity: a painted-tile sink, a bed, extra blankets, a couple photos of the creatures we came to see, and a back door to a porch on intimate terms with the lagoon. (The waves are a stone’s throw away.)

It is rustic in all senses here: sawdust toilets (which were kept fresh and clean against all contrary notions), no cell service or internet, just the wild and awesome lagoon, and all of the wild things it contains. 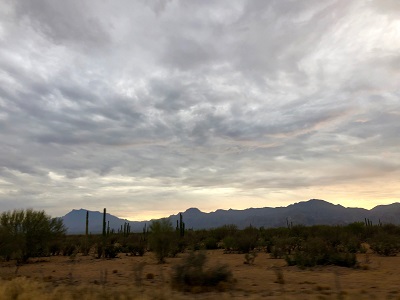 Will the whales be in the lagoon? I ask. “Nadie sabe,” (nobody knows), says Antonio’s brother— but a couple of whales had been seen just a few days previously, and pregnant mothers usually arrive first to birth their calves. They are out there, I think, as I fall asleep to the waves.

Travelers tip: For finding remote places like Antonio’s, which isn’t on the google maps app, copy and paste the GPS coordinates from the iOverlander entry, and paste in the maps app. Take a screenshot before you lose service: the final dirt road portion includes a few forks and it’s by sheer luck that we guessed right.