The Shanti Kitchen at Espacio Amor 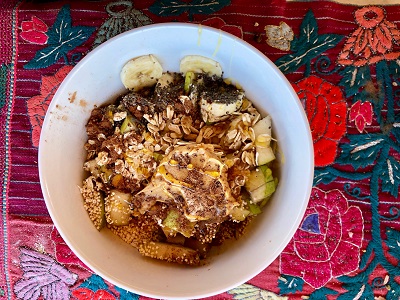 On my first morning waking up in an airbnb treehouse in El Pescadero, I add my breakfast request to the chalkboard in the kitchen palapa, and go out for a walk in the "sierra." This is what the residents call the cactus forest that extends between the freeway and the beach.

I walk along a dried creek bed, ducking under and around webs made by fat, octagon-shaped spiders, and then down a quiet road, encountering birds, lizards, butterflies, and not a single human.

My "Power Bowl" is waiting for me when I get back, a beautiful convergence of bananas, apples and papaya, chia seeds, oats, cacao, and a generous spoonful of peanut butter. If the Shanti Kitchen is the heart of Espacio Amor, Natalia is the heart of the kitchen. She and Aida, the camp’s gracious Airbnb hosts, turn out the best food from whatever ingredients they have on hand, bought or shared, and they do it with love.

I drizzle my breakfast with local honey I bought from a señor outside El Chorro hot springs. I will eat some version of this delicious breakfast almost every morning in the south of Baja. Fruit from the local markets! Pineapple, kiwi and mango sometimes make an appearance. Toppings are nonperishables like puffed quinoa, homemade granola, toasted coconut, and peanuts—all found at the local Saturday morning farmers market here.

There is a camp blender, which is nice for turning the piña miel, the sweetest pineapple I have ever had, into agua de piña.

My delicious breakfast is 45 pesos, or $2.36, but Natalia says we’re even, since I’d made the water run last night, refilling the camp’s four five-gallon jugs of water for 44 pesos.

It is a sharing economy at the Shanti Kitchen: Anyone who nudges a vegetable, or some tortillas or beans toward whoever is cooking, will get a plate of food in return when it’s ready. Cooking smells draw friends and new passers-through to the wooden benches and cloth swing hanging from the beams. 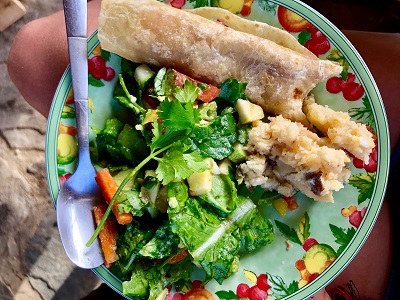 Outside, a clay oven will soon offer pizzas along with other lunch items for travelers.

"The Shanti Kitchen is the heart of Espacio Amor," says Aida. The kitchen’s tiled floor was the very first thing to be built here—even before the palapa went up around it, and it stays cool even in the hottest part of the day. The kitchen has a gas range and sink for washing dishes, a couple coolers, and hanging cubbies holding food. I learn the hard way that putting food anywhere but in the hanging cubbies will attract a swarm of tiny ants. It is a mystery to us all why the ants never find the food stored in the hanging cubbies, and I’d still like to know.

Natalia makes a certain rehydration drink on the hottest afternoons—a secret concoction involving fresh-squeezed limes, raw honey and sea salt to ward off heat stroke. Nobody wants to be drained into paralysis with the chills, so taking a break in the shade and restoring electrolytes is definitely a good idea. She is also brewing kombucha, which rests quietly on a shelf in the shadiest palapa.

I’ll have many memories of this place when I finally leave, including fireside and kitchen conversations between American, Swiss and Mexican friends, and the constant observance of water levels in the camp’s giant tank. For a three-day stretch until the water man arrives, the most prominent topic of discussion is how to shower with the least amount of water. But even standing in a bucket in the camp’s open-aired shower under a frugal trickle of water is the most worry-free I’ve been in a long time.

Travelers Tip: If you’re cool with saving water and living plastic-free, then Espacio Amor is your tree-house retreat: find them on Airbnb.