The Sights and Shells of Bahía Concepción

First glimpse of the beautiful waters of the Sea of Cortez 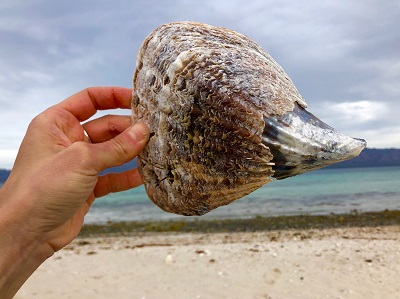 The color of the water in Bahía Concepción is an unreal sapphire blue-green. A closer look at its white-sanded beaches reveals a penny candy store’s variety of shells—from tiny snail and clam shells to colorful corals and giant mollusks. There are more shells here than I’ve seen on any other beach in Baja.

The 1 south toward Loreto from Mulugé gave us our first real glimpse of the Gulf of California, aka Sea of Cortez. The road winds above the bay, and in places it feels a lot like the 1 along the Big Sur Coast. The vistas of rock and sea are exhilarating.

Here, we also get our first real glimpse of a subculture of nomads that is alive and well in Baja: Bahía Concepción seems like a magnet for snowbirds, and its many beaches offer camping and RV hookups. We stop at the second and largest beach on the north end of the bay, Playa Santispac. 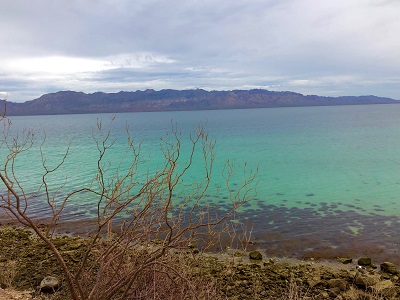 Giant RVs with names like “Cyclone,” “Alfa,” and “Mountain Aire” line the shore, some of them fully set up with outdoor showers and living rooms, solar panels and four wheelers. There are plates from Arizona, California, Florida, Michigan and Wisconsin, but most of them say “Beautiful British Columbia.” It’s a trend that continues throughout Baja: there are so many Canadians here!

We decline an offer from a local to take us out in his panga (boat)—a tempting invitation had it not been about to rain. (They charge around $15 an hour in the high season, but negotiation is recommended.)

On the north end of Santispac we find a secluded cove and hike around its lip. From a trail high above the cove we watch pelicans, egrets, and a dolphin or porpoise far below that surfaces with a loud exhale from its blowhole every few minutes. 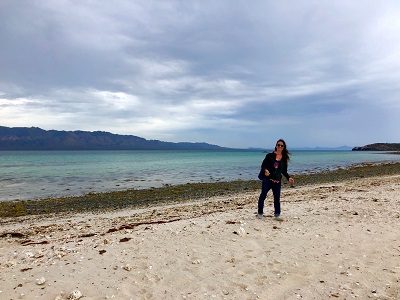 I look forward to returning to the beaches of Bahía Concepción when the weather is even warmer, because it’s totally gorgeous here.

Camping at Playa Santispac: About $11 Day Use: $5, though nobody came around to take our money in January