Wind on the Lagoon

“Un poco de aire,” comments Daniel, Antonio’s son. We’re at Antonio’s EcoTours, a hamlet of tiny cabañas on the edge of San Ignacio Lagoon, and the wind has been blowing almost nonstop since we arrived 48 hours ago. It howled through the night, shaking the little cabin on stilts that we are staying in, and seeping through the cracks around the window and doors.

I appreciate Daniel’s observation of “a little air,” because I can’t tell if it’s sarcasm or, more likely, a tendency I’ve noticed in Mexico to downplay weather and other such inclement things. Later I confirm that “un poco de aire” is used to describe a “draft.” It’s just too good.

Wind is nothing new on San Ignacio Lagoon. They say it blows all morning, calms for a brief hour or so at midday, and then picks up again—in the opposite direction. A day without wind is rare, Daniel says. But, the year-round residents here tell us, it’s usually not this strong: A northerly blowing at 70-kilometer-per-hours, or 43 mph.

We came to see the whales, but “no es posible,” until the wind relents. The entire lagoon is striped with white caps—and the churning sea would make for a harrowing boat ride. So we’re waiting it out. I once read about the wind at the guano-crusted Farallones Islands in the North Pacific—incessant, merciless, sanity-threatening. The wind on this South Pacific lagoon is a thrill of its own. 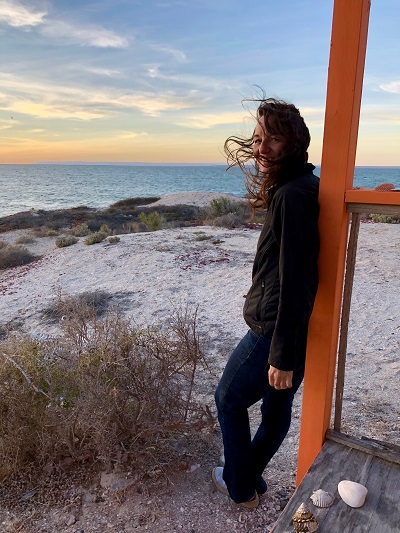 About a dozen cabins here run on solar and wind power. There are sawdust composting toilets (water is a scarce resource in all of Baja, and especially out here), and showers that trickle on the cool side of warm when the sun is up.

The stars are riveting here—among the brightest I’ve seen on Earth as of yet thanks to the dark swath of ocean and minimal light pollution. From our front porch, the waves crash about 20 meters away. On our first morning we watch dolphins and pelicans from here.

Whale watching expeditions dwindled gray whale populations considerably beginning around 1860 in this lagoon, and back in the earlier part of the 19th century Antonio’s was a whale-processing camp—the blubber oil used for candles, soap and to grease the machines of factories.

The gray whales usually enter Baja’s lagoons (mainly Ojo de Liebre in Guerrero Negro, San Ignacio, and Bahia Magdalena) in late December. The pregnant mothers come first to give birth in the saltier, more buoyant waters, followed by the rest. According to one iOverlander user, the tours given in San Ignacio lagoon are the friendliest to the whales, which is why we’ve decided to come all the way out here. 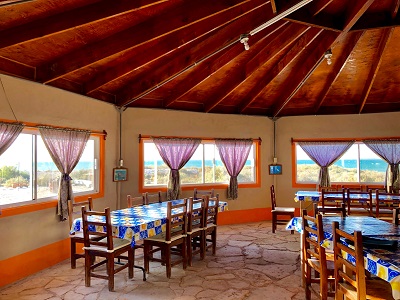 Antonio’s is the longest-running whale watching outpost on the lagoon, and it’s also the only locally owned option.

We spend two days walking the shell-strewn beaches at low tide, and then take refuge from the wind in the communal dining hall, where we eat well—Antonio’s wife cooks breakfast, lunch and dinner for guests who order it—and read science and guide books from the library. We stop trying to connect to wifi.

Two men from Texas, who are touring Baja on their motorcycles, putter in and join the stake out. Molly and I drink Coronas and tea with them and swap notes about our travel points of interest, and we can only laugh at their impressions of Californians invading their hometown of Austin. 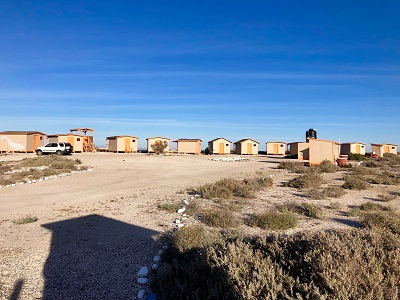 Cabana at Antonio’s: About $35 per night Meals at Antonio’s: $10 avg., lunch usually includes some sort of fresh-caught seafood Whale Watching: $50 per person for 90 minutes plus 15 minutes out and back. More info on Antonio’s EcoTours at cabanassanignacio.com.