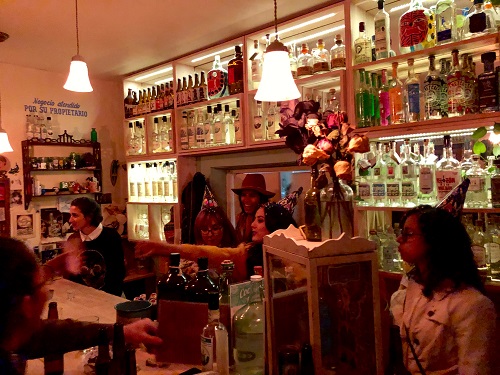 By 11:30 p.m. on a Saturday night, the only mezcal bar in La Paz is packed. I slip past some people milling around in the street outside smoking cigarettes, and into the cozy warmth of La Miserable (named after the bossy resident cat who likes to hang out on the bar).

A wall of hundreds of mezcal bottles is backlit behind the bar, and the bar’s owner, an Australian expat, is drinking a Victoria beer at one of the stools. His name is Mark, which comes out like “Mock” in his Australian accent, even though he’s been in La Paz for the better part of a decade.

When I eventually ask Mark what he loves best about this successful little night club (almost six years old now) he mulls the question over for a few seconds then shouts over the din: “The people!” The answer makes me smile.

It’s clear that there is a loyal local scene here: Mark receives about six hugs from drunken friends passing through during our 10-minute chat. But the place also appeals to travelers, and its welcoming staff treats me like a longtime friend, even before I out myself as a journalist. I’m always a tad nervous walking alone into a crowded bar, but my worries have melted away here very quickly. 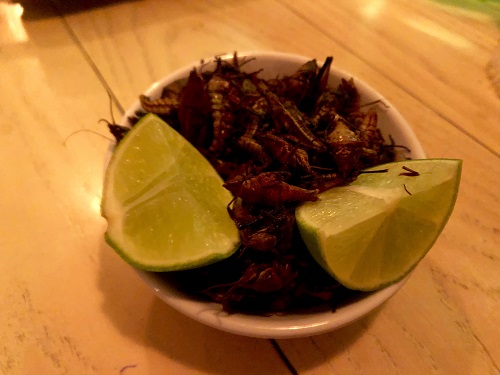 "Do you like smokey or floral?" asks a female bartender, who is celebrating her birthday tonight.

"Floral" I reply, though I know very little about mezcal and its long history as a sort of moonshine, made from the heart of the agave plant. I settle on one single shot of “Magia” (made in Guerrero, Mexico) for $140 pesos ($7). It’s floral and smokey and very strong. Interested patrons can learn all they want to know about mezcal at this place, and I gather it’s quite possible to leave very, very drunk.

Mark orders a bowl of chapulines (fried grasshoppers). “Just don’t look at them!” advises a happy woman with dark nails and a leather jacket sitting next to him. No doubt a friend of Mock. But it’s too late. I stare at the bowl of inert insects. It's grotesque, but the lime wedges placed on top of them demand an open mind: They seem to say “this is not a joke.”

People eat animals all the time—how can grasshoppers be more gross than a cow or pig? I pick a smaller one up by the leg, close my eyes and chew. Salty, fatty, crunchy. Mark jokes that after a night at the Mezcaleria you might wake up with grasshopper legs between your teeth.

But I’m practicing moderation tonight, and one is enough. I thank him for the grasshopper experience, and take my shot outside to a side patio, where tables are filled with groups of friends enclosed by plant-filled walls and strings of lights. It’s so freaking beautiful here, and I soak it all up, eavesdropping as I do: A drunken Argentine quotes Voltaire to some Canadians in discussion of atheism vs. agnosticism; a group of Mexicans reminisces about a fishing trip where something funny happened. The table dissolves in laughter.

I savor the shot of mezcal over the course of an hour. Sips of smokey-floral fire are enhanced by a single rolled cigarette of damiana and Oaxacan tobacco (purchased at La Paz’s nearby smoke shop). Just as I stub it out, of course wishing I had brought two, a waiter brings me a plate of sliced oranges sprinkled with chili and salt—and the flavors of the citrus and heat harmonize so wondrously with my final sips of the Magia. They are indeed my final sips of this beautiful city, as we leave tomorrow to make the long drive back home to California. 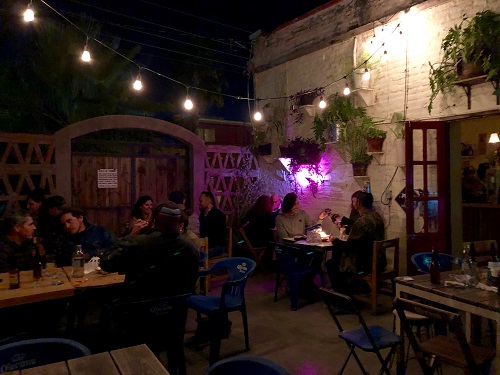 When I finally head for the door, a man hands me a party hat and pours colorful paper confetti into my open palms. I throw it over the birthday girl behind the bar on my way out, pausing to watch it rest in her already-confettied braids. I take her smile with me. This little mezcaleria is a dream within a dream, I think, as I walk home, a birthday hat snugly riding atop my head.